As part of our 2-day trek through Sapa, Vietnam, our Black Hmong tour guide Zaazaa took us to her family’s home high in the rice terraces that make up Ta Van Village. While the Red Dzay minority lives primarily at the bottom of the village, the Black Hmong live at the very top of a steep climb. When we arrived, her mother, father, younger brother, and younger sister were gathered inside their completely dark, dirt-floored home trying to beat the midday heat. Her other brother was off playing in a nearby forest with friends while her other sister was selling handicrafts made by their mother at the market in town 10 km away. Her mother and sister weren’t wearing the heavy indigo-dyed traditional dress we’d seen every other Black Hmong woman wearing in town, and once Zaazaa reached the comfort of her childhood home, she removed several unnecessary layers as well. Her father wore a T-shirt that had been worn thin from many days in the rice paddies.

Our visit was unannounced but her family was very accommodating. They set out a ring of plastic lawn chairs in the home’s main room and turned on the lone light bulb that dangled from the ceiling. Her brother positioned a floor fan to ensure we were comfortable. After a few minutes of chatting, we asked Zaazaa’s 4-year old sister Mani (the Hmong equivalent of Mary) if she would like a picture. She shyly agreed. We suggested that we take the picture outside in better lighting and headed out to pick the most picturesque spot. Zaazaa followed but Mani was nowhere to be found. Her mother had insisted that she change into her most formal clothing for the picture. She emerged in a full set of traditional Black Hmong garb. Zaazaa fixed her sister’s hair while her mother ensured every element of Mani’s outfit was picture perfect. Never before has so much fanfare gone into preparing for a polaroid but their efforts helped illustrate the significance of the moment for the little girl and her family. Though she had been an adorable bundle of energy when we arrived, once the camera came out, she refused to smile. 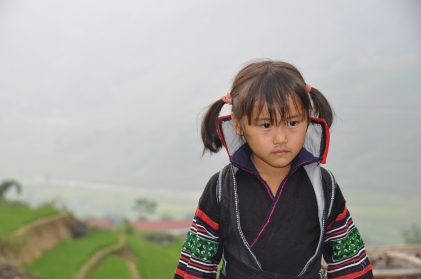 Mani posing but refusing to smile

Ting tries in vain to get a smile out of Mani

Showing off her photo

After Zaazaa’s parents saw the success of Mani’s photo, her mother wanted one with her youngest daughter. She went inside to don her traditional attire and to retie her headscarf in preparation for her photo. While we were all busy watching Mani admire her new photo, Zaazaa’s dad proudly emerged from the house wearing three layers of collared shirts and a blazer, seemingly in an effort to ensure all of his nicest clothes were on full display in the family photo. Ting eyes widened and then her heart melted. It was by far one of the cutest Polaroid Project moments and we were all humbled by their efforts.

Looking over the polaroids

Three collared shirts AND a jacket

When our photo session ended, we went back inside and Zaazaa’s mother showed us the only picture frame they had in the house. Within the frame, they stacked up the few photos of family members they had so that only the top one was visible. The one currently on display was Zaazaa’s parents and Mani superimposed over a fake waterfall background. They explained that it wasn’t even really Zaazaa’s father, just his head put on top of a generic Black Hmong man’s body. While taking the Polaroid photos, we also took a few of the family on our DSLR camera and were able to have them developed when we got back to town for Zaazaa and her family.

On our way down the mountain after leaving Zaazaa’s parents home, we ran into her 10-year old brother. He was carrying a tiny yellow bird he had caught while playing with his friends. The bird was too young to fly so it just rested in his hand. We were a little horrified at the picture of this boy raiding a bird nest but Zaazaa explained that because the bird is so young, it will eventually become attached to her brother almost as if he were its mother. He’ll feed it crickets he catches in the fields and raise it as a pet. He was eager to show off his catch in a photo. 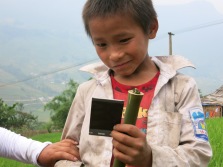 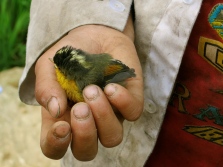 The baby bird he caught 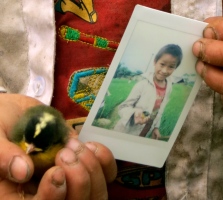 The photo perfectly captures how proud he is of his bird 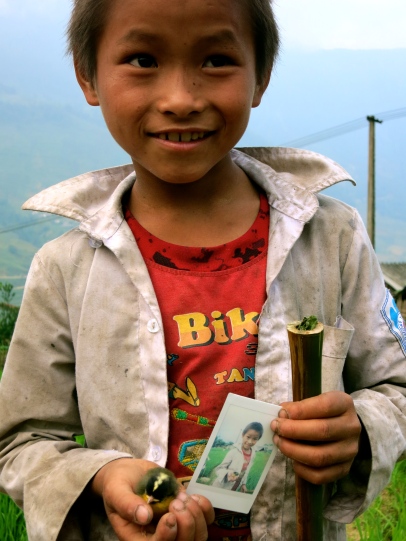 Showing off his new possessions