The next phase of our journey was one of the trickiest logistical challenges of the whole trip. After Sapa in northeastern Vietnam we wanted to visit Luang Prabang in the center of northern Laos. The two popular tourist destinations sit just over 200 miles apart as the crow flies, but the scarcity of infrastructure in this part of the world makes the most direct route by road nearly twice as far.  Google Maps would have you believe a ~9.5 hour drive could deliver you from point A to point B. If only it was that simple…

The first leg of the journey was a bus from Sapa to Dien Bien Phu. If you feel like you’ve heard of Dien Bien Phu before you’re either a scholar of the Vietnamese struggle for independence from the French or you’re an incredibly attentive fan of Billy Joel. The road to DBP winds through rough, mountainous terrain. A large portion of it is unpaved, is barely wide enough for 1 vehicle, and tip toes along the edge of a cliff that drops sharply to a river far below. Mix a few weeks of rainy season with those unpaved roads and you’ve got the perfect recipe for a terrifying ride. We crammed into a minibus early in the morning in Sapa. The man in the seat in front of us was passed out. With every bump in the road, his head smashed against the window with a loud thud. It was unclear whether he was asleep, dead, or in a coma from repeated blunt trauma to the head. Partway through the journey two girls got on and squeezed into the back seat with us. They started vomiting into small plastic bags almost immediately and didn’t relent until they got off the bus at a random construction site along the side of the road a few hours from Dien Bien Phu. Altogether, the ride took 8 hours and we averaged a less-than-impressive 22mph. 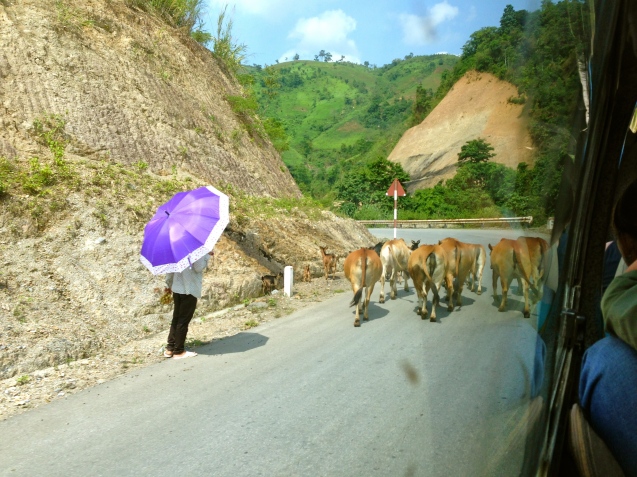 Slow traffic keep to the right

We had low expectations for Dien Bien Phu and viewed it mostly as a stopover where we needed to kill time on our way into Laos. When we arrived, we bought a ticket for the 6AM bus the following morning, found an acceptable guesthouse, and set out to explore the town. We found a sprawling market with an interesting assortment of things for sale (see photo below). Many of the women in the market were of the Black Thai ethnic minority and wore their hair in buns on the top of their heads. The town was littered with fragments of military equipment commemorating the decisive victory over the French in 1954. We had a few drinks at a bia hoi place that offered falcons for sale, then headed to bed in preparation for an early departure the following morning. 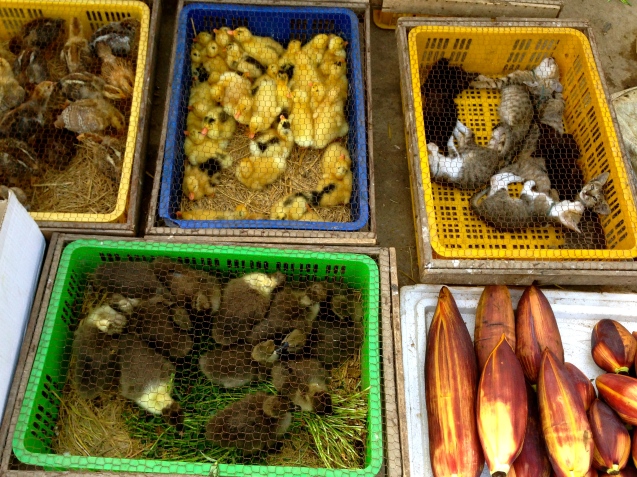 “Heading to the market for milk, bread, and kittens…need anything?” 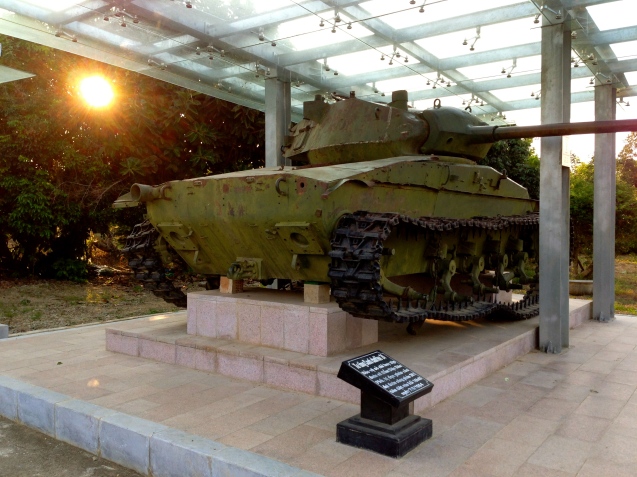 A tank from the Battle of Dien Bien Phu

We woke up extra early the next morning to catch our bus to Muang Khua, Laos. Once at the bus station, we were told there was no 6AM bus and were quickly herded onto a bus leaving at 7:30. When we tried to get more details about what happened to our original bus, the men who directed us towards the later bus followed our every move and intercepted us before we could talk to any bus station employees. The later bus seemed nice and we were told we’d arrive in Muang Khua by 11AM, which was even earlier than our original bus. We assured the driver that we’d already bought our tickets and wouldn’t give him a penny more. We knew we were being scammed but couldn’t really figure out how. We reached the Laotian border and breezed through the process of exiting Vietnam. Entering Laos was a different story. 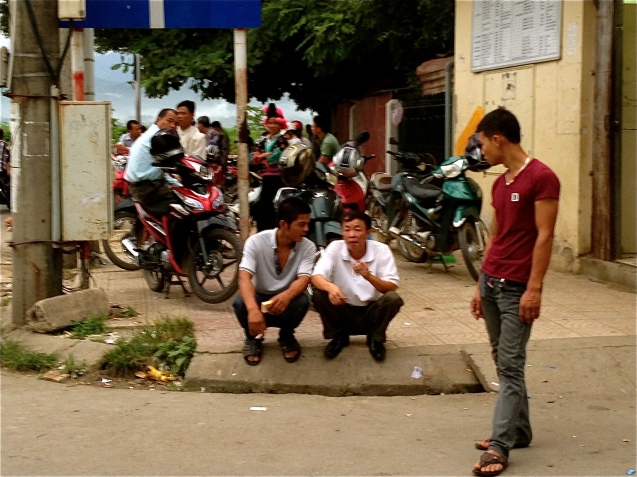 At the Laotian border, every passenger’s visa must be processed individually when entering the country. Our bus unloaded and we all gathered around to fill out paper work. Our bus driver collected 10,000 kip (~$1.30) from each of us which he claimed was part of the stamping and processing fee. Then we lined up to “have our temperature taken” which would cost an additional 3,000 kip. Shockingly, no one had the slightest fever. Our passports were collected and the wait began. Eventually, they called our names one by one to collect the visa fee ($35 for US citizens). According to the immigration officials, this all-inclusive fee actually includes nothing at all. They asked for an additional 18,000 kip to cover the stamping, temperature screening and various other costs. When we asked for an explanation they pointed to a series of signs scotched taped to the window that read (verbatim) “Overtime On Saturday and Sunday is 10.000kip/person Thank you!!!!!!!!!!” and “HELLO!!!!! Fee Service For VISA is 10.000kib[sic]/person THANK YOU!!!!”. While we waited, they hung a third equally official looking sign explaining the temperature screening fee. Meanwhile, our bus driver who had already collected 10,000 from each of us, supposedly to cover these costs, was no where to be found.

At this point, the scam was clear. As we entered our second hour of waiting at the Laotian border, the situation became the perfect storm of Eric’s two biggest pet peeves: people intentionally wronging other people and inefficiency. Normally very nonconfrontational, he did some quick math and easily came to the conclusion that risking an international incident was a small price to pay to set things straight. It wasn’t about the money. It was a matter of principle. Eric hunted down the bus driver and dragged him away from a cold beer back to the immigration office. Meanwhile, Ting led the rest of the passengers as they rallied against the four immigration officials. After a lot of yelling and some choice words, the driver gave us each back the money he’d collected for a fake fee, but we still needed to convince immigration that none of us were going to pay the fake fee. Unfortunately, immigration still had all the leverage. None of us were getting into Laos because they still had our passports. They processed an entire second bus of locals (without “taking their temperature”), ignoring our bus of foreigners who refused to be scammed. After another hour of pleading our case and Eric being forcibly removed from the immigration office, we were able to save everyone on our bus 2,000kip ($0.26). It felt like an enormous victory over evil but was a horrible introduction to Laos. 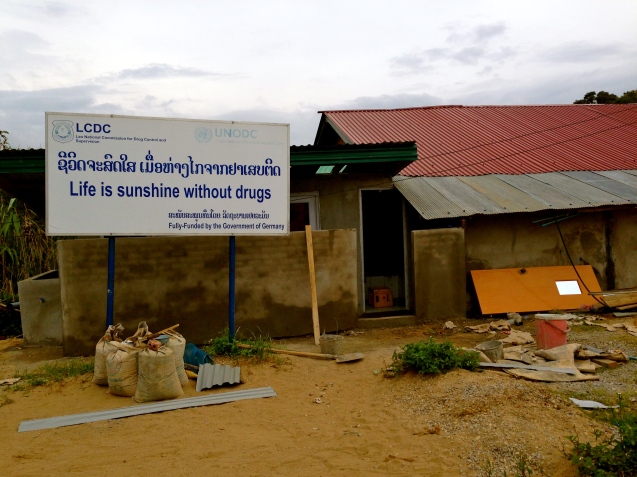 The breathtaking scenery at the Laotian border

After a few more hours on the bus and a lunch stop at a horribly overpriced rest stop no-doubt operated by one of the driver’s cronies, we reached Muang Khua. The town has only one road and the bus would continue along this road on its way to the next destination. The driver however decided to drop us at the outskirts of town. He offered to drop us 2km further along the exact route he would go anyway for an additional 5,000kip/each. We happily declined his offer.  We were thrilled to be off the bus, and never one to let someone else get the last word, Ting expressed her gratitude with a particularly well put farewell to the driver.

Once in Muang Khua we walked around the town looking for a place to spend the night. The front desk of the first place we stopped was staffed by a gang of middle school boys playing computer games. They ignored us. They got no business from us but probably got new high scores. The next place offered to show us a room which Ting checked out while Eric watched over the bags. The focal point of the bathroom decor was a wall covered in ceramic tiles which together formed the image of a naked woman. Finally, we settled on a very simple room overlooking the river. The accommodations were liveable at best, but for one night, that’s all we needed.  The following morning, a 4-hour boat ride would complete our three day nightmare journey into Laos. 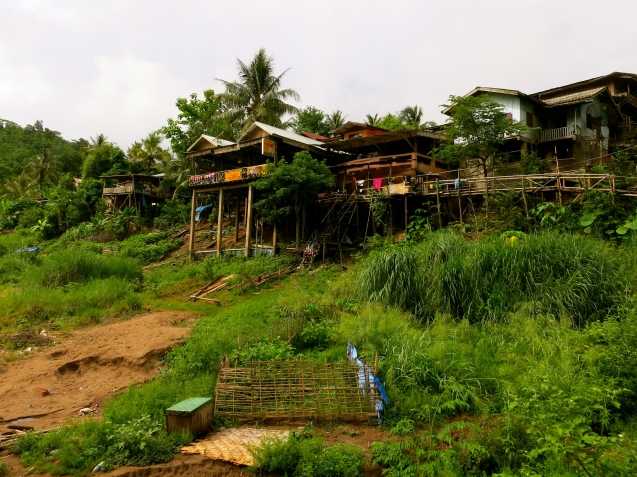 Our guesthouse above the Nam Ou River 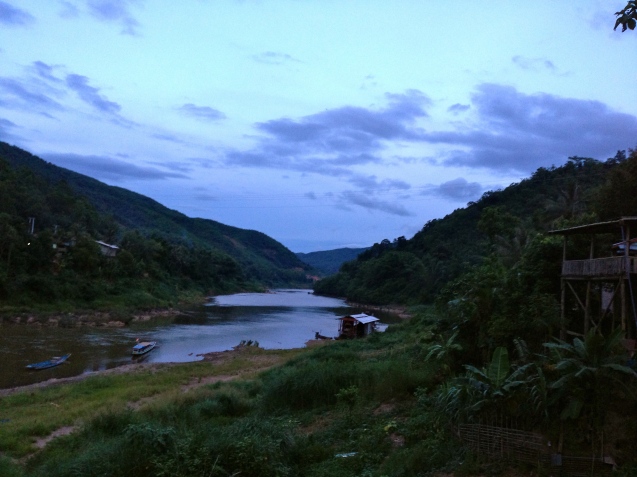 One thought on “The Road Into Laos”