It didn’t take long into our 2-day trek through Sapa to realize that along the way, we’d be confronted by a pretty steady barrage of local children trying to sell us Hmong handicrafts. They were relentless, having clearly rehearsed the exact amount of misery to display to entice tourists into buying more and more. After our first few purchases of coin purses made of traditional hand stitched hemp textiles, it was clear that there aren’t enough coins in the world to justify buying many more nearly identical souvenirs. We envisioned a trailed paved with guilt as we left swarms of disappointed children in our wake. About an hour into our trek, we stopped at a large clearing where several other groups of hikers were resting. A group of 8-10 kids surrounded us bearing an all too familiar assortment of coin purses. Luckily, the Polaroid Project saved the day. When we first pulled out the camera, most of the kids were unsure of what was happening, but one girl volunteered to pose. As her photo developed the rest gathered around to gawk at the picture materializing from out of nowhere. They were no longer interested in making sales, only in posing for pictures and watching the film develop. We snapped a few shots, learned the Hmong word for smile, and were fully ready to take on the army of young sales people we’d encounter along the rest of our trek. 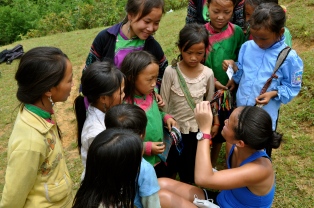 When we stopped for lunch it was more of the same. We bought small gifts from the three girls who had walked with us the whole way and offered pictures to them and the others who were drawn in by our arrival. One girl took the opportunity especially seriously. She could make sales any day, but a personal photograph was a special occasion. She completely redid her hair, put on a fancy necklace, and beamed for her photo. This would turn out to be fairly rare. Very few people smiled for their picture. Whether unfamiliar with the process or uneasy in front of a foreigner’s camera, most poses were very serious. Only afterward, as they watched the photos come to life did they reveal how happy they were to be photographed.

Gathered to watch a photo develop 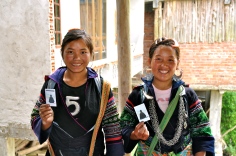 Showing off their pictures

Showing off their picture

Fixing her hair before a photo

Outside our homestay in Ta Van village we met three boys playing in the street. We talked to one, who seemed to have decent English (or at least knew “yes”), while the other two raced back and forth on their bike. When we brought out the camera, the two on the bike quickly turned away and rode off, but the third boy, who understood that he would get to keep the photo, was shyly eager. He marveled as his photo developed, then led us along his street and helped translate so that all his friends and neighbors could pose. Even the boys on the bike came around. One jumped off and posed with his handmade bow and arrow toy. Another boy heard the commotion and rushed outside carrying his dinner. He then posed for perhaps the most stoic polaroid yet and showed it off with an equal amount of enthusiasm. The following morning as we ate breakfast, a few girls gathered outside our homestay. We thought they had come to accompany us on our trek and try to make sales. Instead, they’d heard news of the Polaroids and had come for shots of their own. In the drizzle, they posed beneath umbrellas.

Showing off his photo 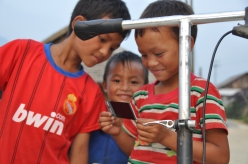 Showing off their photos

Realizing she’s in the photo

Posing with his bow and arrow

Showing off her photo

At the end of the trek, we rode motorbikes back into town. One of the bikes got a flat tire so we stopped at a little store where a group of Black Hmong were congregated outside. Ting approached an elderly woman and asked if she’d like a photo. She snapped back “You take photo, you give me money!” Another woman, was more than willing to step in and fill the old woman’s place. Soon the whole group wanted pictures of their own. An 18-year old mother posed with her young baby strapped to her back. The whole group gathered to watch each picture develop and pass them around…except the original old woman. She bitterly walked off realizing what she had turned down.

Happy with her photo

A boy shows off his photo 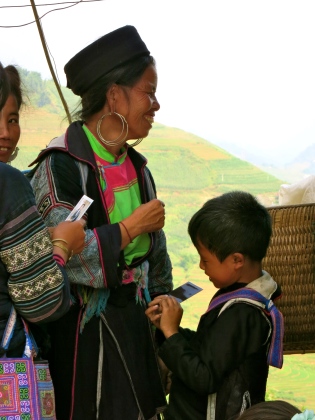