The rain and a never-ending barrage of clouds continued as we arrived in Luang Prabang. After the previous few days roughing it in more rural settings, Ting knew that by the time LPB came around she would need a little R&R and some pool time. Anticipating this, she booked a nicer hotel with a beautiful infinity pool that overlooked Mount Phousi months in advance. Needless to say, the rain didn’t let up until mere seconds after we checked out.

So instead of lounging poolside, we found other ways to fill our time. Our first evening in LPB, we braved the drizzle and headed into town to explore the night market. Although the market was pretty calm due to the rain, the narrow alley of food vendors was a frenzy with hungry tourists. The Luang Prabang night market is well known for its 10,000 kip ($1.28) deal, where you can load up a plate of food from a buffet selection. Most of the food looked like it had been sitting there just a bit too long, so we opted for some barbequed pork and a freshly made papaya salad. This was just the first of many amazing meals in LPB. The snacks and fruit smoothies bought from venders on the street never disappointed. Some of our other favorites were the Laotion set menu at L’Elephant, bagels/coffee at Joma Cafe, exotic drinks at Tamarind Cafe, and a local outdoor D.I.Y. Lao BBQ place overlooking the Mekong. 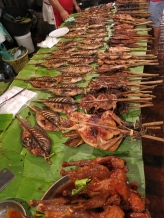 BBQ for sale at the night market 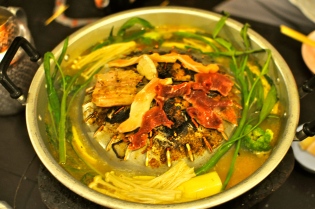 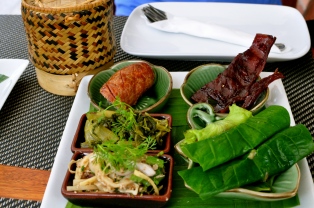 LPB was the first time we had internet access in over a week. We were excited to update wanderingtable.com, get in touch with our families, and check Facebook. In one of the few times that Facebook has actually proved useful, Ting saw that her friend from high school, Will, was also in Luang Prabang! We met up with Will and his wife the following night at the Boat Bar for a few drinks and to celebrate the Blackhawk’s Stanley Cup win that morning. Even now, Ting can’t believe that after almost 10 years, she was able to catch up with Will in Laos of all places!

One of the best ways to spend time in LPB is just wandering around and exploring the town. The very obvious lingering colonial French influence on the quaint architecture, the beautiful flowering plants, and ornate gilded wats make LPB a fascinating place to discover as you go. Its compact size allows you to easily explore the historic center of town on foot. Each morning the wet markets are packed with locals and every night the tented market along the main street is packed with tourists. One of the most popular sights in LPB is the daily alms giving ceremony. A procession of ~250 monks walks silently down the main street accepting donations of sticky rice and other foods. Their collections serve as their only food for the day. We spent several days walking, biking, and motorbiking around just taking in the sights along the way. 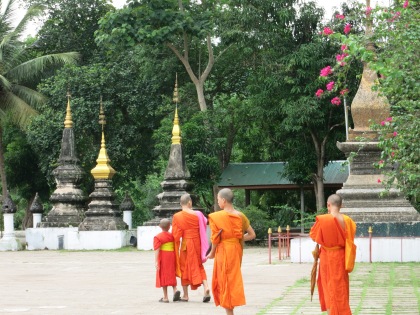 Potted plants outside the Belle Rive

Colorful parasols at the night market

The streets of LPB 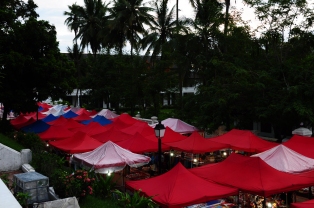 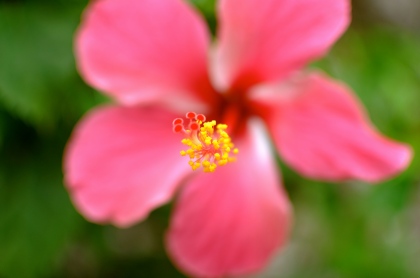 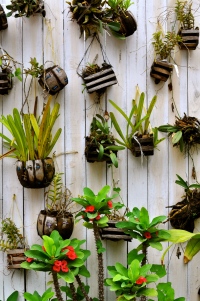 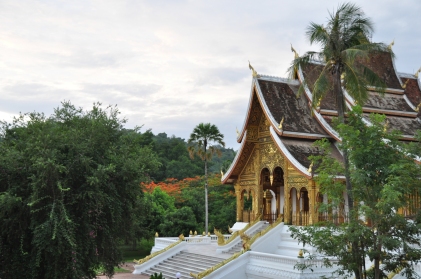 One night we climbed the ~300 steps to the top of Mt. Phousi to watch the sunset. The mountain overlooks the town and surrounding area, with a great view of where the Nam Khan River collides with the Mekong forming the peninsula where LPB sits. Wat Chom Si, a Buddhist temple, sits at the summit. So do dozens of Chinese tourists with impressive camera equipment.

Sunset over the Mekong

Our last full day in Luang Prabang, we rented a motorbike to ride to Kuang Si Waterfall about 30km outside of town. We visited a bear rescue center near the entrance of the park and then made our way to the star of the show. Kuang Si is made up a series of increasingly impressive waterfalls culminating in a 200ft cascade at the final and tallest drop. The highlight was a rope swing in front of one of the medium waterfalls. After a precarious climb up a tree growing horizontally over the water and a stretched reach for the rope using a stick, we could swing into the deep pool directly in front of the falls. We each adopted slightly different forms. 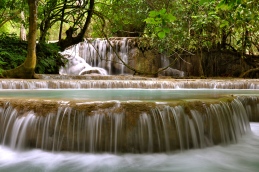 Ting reaching for the rope

A fight at the bear rescue center 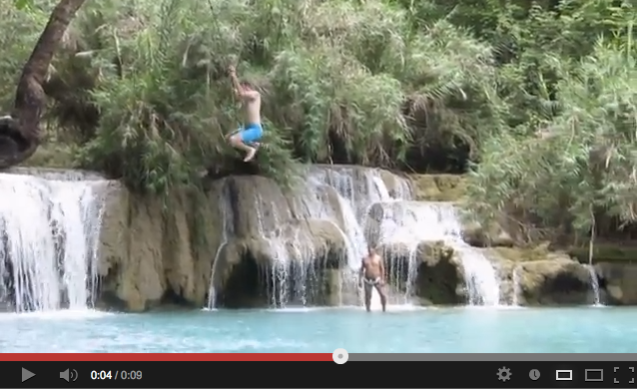