We reached Detian Waterfall after a 90 minute bus ride from Daxin and were shocked to find it practically deserted. Serving as China and Vietnam’s equivalent of Niagra Falls, its remoteness has relegated it to a footnote in guidebooks about China. None of our Chinese friends or colleagues in Shanghai had heard of it, let alone been. 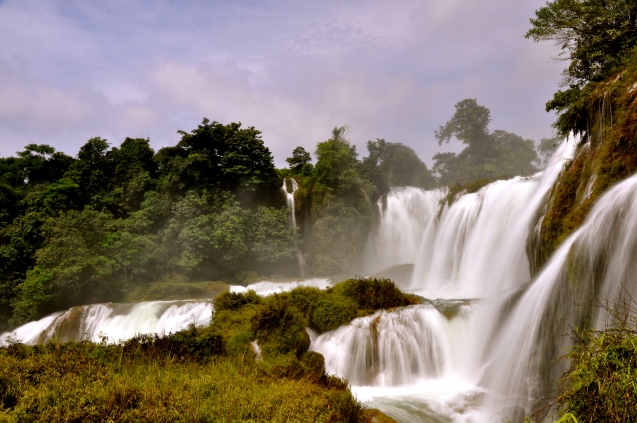 The many tiers of Detian Falls

Having rained the previous few days, the falls were roaring at close to full capacity. The skies cleared and we were left with a beautiful day to view the falls. The Guichun River (Vietnamese: Quay Son River) divides the two countries. China claims the larger much more spectacular waterfall on the right while the taller more slender fall is in Vietnam. Tourists from both sides can take boats to observe the falls close up but can’t disembark on the opposite side (despite how much Ting pleaded with the men steering our boat). Floating vendors meanwhile freely drift back and forth between the two countries selling cigarettes and souvenirs. We were rather jealous of the Vietnamese side where swimming was allowed as it looked like loads of fun. When we asked why we couldn’t swim, the Chinese employees put our questions to rest with a less than satisfactory “because you can’t.” It was finally clear that Vietnamese Communists are much more fun than Chinese Communists. 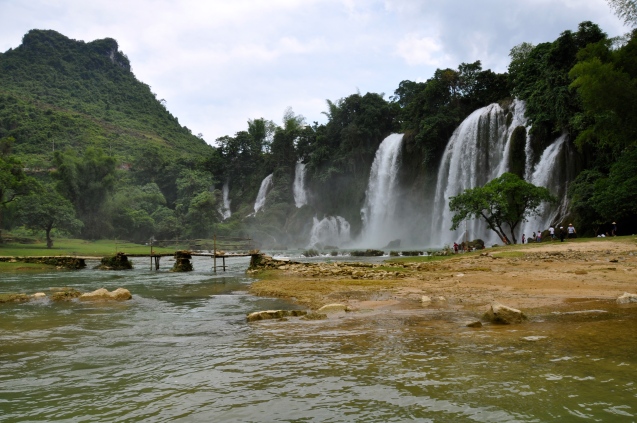 The Vietnamese side of the falls

At one point while exploring the site, we unknowingly wandered into Vietnam. Vendors sold Vietnamese cigarettes, coffee, currency, candies, and medicinal balm made from bear bile. We stopped for a bowl of pho and a dessert drink with ice, red bean, and jellies. Back in China we bought two ears of corn from an old lady who hustled Ting because she was convinced Ting was a tour guide leading around a wealthy foreigner (“Buy more corn. He must have money. He paid you to bring him here, right?”). Both ears were as small as corn can be without technically being baby corn.

Pho for lunch after wandering into Vietnam

The ride back was fueled by blasting techno music (“bring that big bottom down, drop that booty to the ground”), an apt soundtrack as we flew out of our seats over every bump in the road. Every seat was occupied and every inch of aisle space was filled with stools holding additional people. The drive proved once and for all that lanes are merely optional and leg room is altogether unnecessary.